NOTE: This story has been updated as authorities have released name of man killed.

Authorities have identified the man who Crystal police believe was accidentally shot and killed during a Halloween party Saturday night. The Hennepin County Medical Examiner identified the victim as Maricio Mata-Thelen, 26, of St. Paul. The examiner says Mata-Thelen died of a gunshot wound to the torso.

Angel Benito Villalva, 29, is charged with second-degree manslaughter. Crystal police say around 9 p.m. Saturday, they were called to a residence in the 5500 block of Yates Avenue North. Officers and first responders located Mata-Thelen and attempted several lifesaving measures, but those efforts were unsuccessful.

Police say there were four other adults in the house at the time officers responded. So far, police say all the interviews and details indicate the gunshot was an accident.

“We’ve seen an increase in permit to purchase here at the police department. That makes me believe there’s more guns around and it’s a great reminder that you can’t be overly cautious and safe when you’re handling a firearm. You’d hate to be a victim or in this case in an incident that turns out tragically like this,” said Crystal Deputy Police Chief Brian Hubbard. 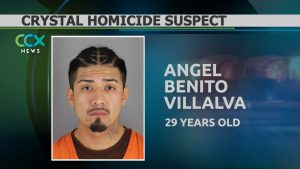 Police say the suspect turned himself into Bloomington police before Crystal took possession of him.