A car dealership near Bass Lake Road and County Road 81 was burglarized Wednesday morning, Crystal police said. Eight vehicles were stolen from the Cities Auto lot along with a dozen key fobs. The incident led to an overnight police search resulting in two arrests.

Police did a stakeout of the area when one of the officers spotted a vehicle on the frontage road driving by the dealership with no license plates. Officers tried to stop the car, but the driver ran away.

“The vehicle made it about three blocks before the driver hit a curb. The suspects bailed out and fled into the neighborhood,” said Lt. Pete Underthun. “Brooklyn Park assisted us with officers and a canine, and we set up a perimeter. The State Patrol helped, the helicopter came up and helped us search the area as well, and we were actually able to arrest two suspects.”

Crystal police believe the key fobs recovered are linked to the burglary on Wednesday. In August, a Brooklyn Park dealership had more than a dozen vehicles stolen. Lt. Underthun said it’s too early to know if the cases are related. 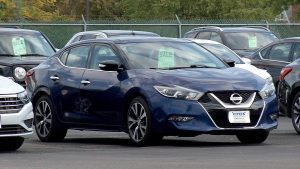 Two people are in custody after vehicles and key fobs from stolen from a Crystal car dealership.