Crystal Afghan Vet on U.S. Troop Withdrawal: ‘It Is Very Much So Heart Wrenching’

A Crystal veteran who served in Afghanistan says it’s “heartbreaking” watching the south-central Asian country fall into the hands of the Taliban.

Jim Doten is commander of the Crystal VFW and has served in the military for more than 30 years. The veteran did one tour in Afghanistan from 2011-2012 with the Minnesota Army National Guard.

Doten’s job was to help improve agriculture in one of the poorest countries in the world.

“You certainly have compassion when you see how they live and particularly the insecure food situation that they have trying to provide for their families,” said Doten.

“It’s very much so heart-wrenching. You really develop rapport with the villages as you come in and out,” Doten explained.

Doten says he is keeping a close eye on what’s happening overseas.

He says he’s surprised the Taliban gained control so quickly.

“I didn’t expect it to fall this quick. However, once we pulled the support, the institutions were too immature to stand on their own yet,” Doten said. “When we abandoned them, in my opinion, abandoned them, it was a matter of time.” 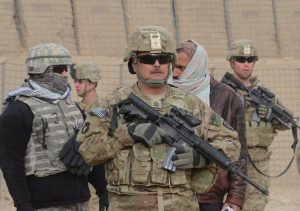 Jim Doten of Crystal served in Afghanistan with the Minnesota Army National Guard.

Doten wants the U.S. government to support the Afghan people who assisted U.S. troops with their mission. Currently, cargo planes are trying to evacuate thousands of Afghan allies desperate to flee the country.

“Make sure that they’re safe and taken care of also that we work with the government in this transition to ensure as best we can from the position we’re at now,” he explained.

And the VFW leader hopes his efforts in Afghanistan were not in vain.

“I really hope that the skills that we did in trying to help provide for the farmers and the families in the villages are what endures behinds this on a humanitarian level,” said Doten.