In the middle of a suburban swamp, work crews spent Wednesday clearing debris caused by a recent lightning storm. A New Hope tower is now twisted steel, brought down by the overnight storm, which occurred from Sunday, Aug. 9, into Monday, Aug. 10.

“This is a total loss,” said Adam Navitskas of One Way Wireless Construction.

Crews are assuming lightning hit one of the footings that holds the guide wires that support the center tower. 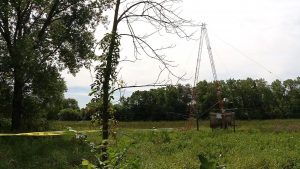 “Possibly blew out the concrete,” Navitskas said. “That’s what caused the anchor to fail. But we’re not 100 percent sure because we’re not able to dig in there because it’s in the middle of the swamp. There’s no way to get heavy equipment out there.”

Crews expect to finish the tower cleanup job in two or three days.

The 300-foot AM radio tower is located in a wetland next to a popular biking and jogging trail, which creates unique challenges for workers.

“It’s a very swampy area,” said Dave Lemke from the New Hope Public Works Department.  “Luckily an area where it didn’t affect anybody the way it came down.”

“It’s really rare for a tower to just fail on its own like that,” Navitskas said. “I’ve done a job in Nebraska where we had to rebuild a thousand foot tower. Because a small engine airplane crashed into an existing tower out there during a foggy night.”

The tower’s steel will eventually be recycled.

“They’ll break it back down,” Navitskas said. “They’ll refab it into something else once they smelt all the steel down.”