Cooper High School senior Jace Herman has been in band since fifth grade transitioning from playing the clarinet to the saxophone. Music helps her find her rhythm to do many things.

“It just helps focus in, not only do I play it, I also listen to it when I need to focus on my schoolwork, or just truly enjoy it as a class,” Herman says.

But music is just part of her success.

Herman loves banding together with her classmates and likes creating change too. She was part of planning for a walkout last spring after the police killings of George Floyd and Daunte Wright.

“Obviously we know a lot of unfortunate events happened within our community, within our state, within actually the whole country and I wanted to help give students a safe space to know that we hear them.”

“She’s just so in tuned to what’s going on in the school. She’s involved with everything. And really the eyes and ears of the school. She tries to figure out ways to improve, always coming up with ideas. Just has a passion for making Cooper a better place,” Geise said.

“She’s such a strong leader. She’s the captain of two sports, she’s the president of Student Council. She’s involved in so many other things, Link Crew, yearbook, she’s just involved in everything so gets to know a wide range of different students and she’s just a strong leader in getting others to follow suit,” she continued.

Herman says she enjoys the work she does with Student Council. Over the years she’s held the roles of public relations officer, co-vice president, and now has the honor of being president.

“And I’m so excited because I really want to help students know that they have a voice,” Herman said.

“Even though I’m part of Student Council I’m also just like a regular student. I walk through the same hallways as anybody else, I go through the same classes, I do everything the same, so really it just comes from knowing how they feel and wanting to do something about it.”

Herman credits her dad as one of her inspirations to stay active.

“I’ve just enjoyed getting involved in so many different things and just wanting to be part of the community as much as he is, because he does so many great things for the community.” 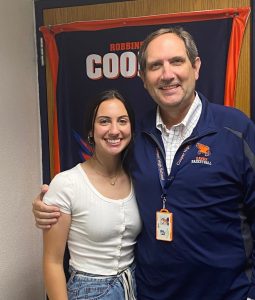