The D-line will add 59 new shelters with heat, light, security features and real-time information. Buses will also provide service every 10 minutes throughout most of the day and people will have to prepay for tickets. 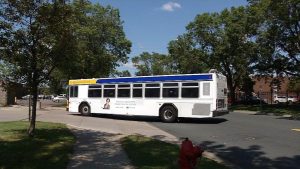 The Metro Transit D Line will launch in 2022.

“The Metro D Line was designed to provide upgrades to route 5, Metro Transit’s busiest bus route,” Olson said. “This route carries the most passengers per day, but it often sees itself slow down in traffic. It often sees itself stopping frequently every block pulling in and out of traffic.”

Olson said there will not be any construction in Brooklyn Center because the Metro D Line will share stations with the C Line. However, riders will see construction from downtown Minneapolis to Bloomington.

The best way to keep up to date with detours is to visit the Metro Transit website and sign up for updates.

The 18-mile project is set to begin the first week of April. The D Line is expected to launch in late 2022.