The Sun Foods Supermarket in Brooklyn Center plans to repair its parking lot after several complaints over the years, a manager with the store told CCX News.

Jill Dalton, a Brooklyn Center resident, shops at Sun Foods once a week. Dalton said she’s fed up with the trash in the parking lot.

“We’ve done cleanups there throughout the years, but it’s really the responsibility of the entity that owns the shopping center,” Dalton said.

Brooklyn Center city staff said they get a heap of complaints every year due to potholes and garbage. 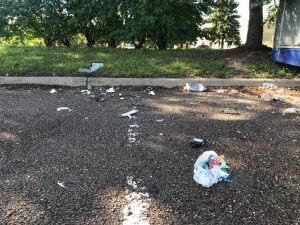 “Complaints are seasonal. After winter usually is when we get complaints about (potholes and garbage), not only here at Sun Foods but parking lots in general,” explained Xiong Thao, the Brooklyn Center housing and community standards supervisor.

City officials say Sun Foods violated the city’s property maintenance code which impacts general appearance curb appeal as well as health and safety. Some concerns include potholes that may cause issues to vehicles and not having clearly designated spaces for parking and handicapped.

The city said its been in direct contact with Sun Foods on a weekly basis. Officials continue to monitor the property for compliance of city codes. If property owners don’t comply, the city can cite them.

Thao said citations are anywhere from $125 to $2,000. However, the city has not yet cited Sun Foods because the business had plans to resurface the parking lot this year. However, due to COVID-19, the project will be delayed.

But residents believes it’s the perfect time for the business to repair their lot.

“It seems like this summer and fall is the perfect time to do outside projects. You have to lay off staff? Well don’t lay them off. Take them outside and have them clean out garbage,” Dalton suggested.

A Sun Foods manager said employees have been picking up trash and filling in big potholes when they can. The manager told CCX News that they don’t have the manpower to repair the parking lot currently. He added that fixing the parking lot during the pandemic could affect business even further.

While resurfacing at Sun Foods won’t begin until next year, Dalton hopes residents will still lend a helping hand.

“Every time I take a walk, I carry a bag with me,” said Dalton. “Don’t throw your stuff on the ground because this is what happens.”