To the uninitiated, an advanced math class at Champlin Park High School may sound like a foreign language.

But for Maura (pronounced Moira) Wahl, a Champlin Park senior, math class is where she feels right at home.

“I just think it’s fascinating that there’s always an answer,” Wahl said. “With reading it can be interpreted, but there’s always a solid answer for math. Which really interests me because no matter how hard a problem is, there’s always some way to solve it.”

Her love of math isn’t relegated to the classroom. She also participates in the school’s math league and robotics team.

Her hope is to one day turn her fascination with math into a career.

Helping people is one of her passions.

When she’s not flexing her intellectual muscles, you can find her doing volunteer work, providing guidance to one of her teammates on Champlin Park’s cross-country team (where she serves as a team captain), or just working with others in the classroom. 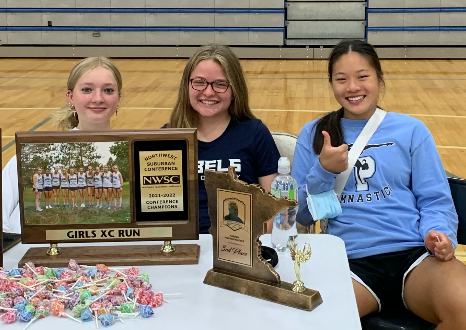 “She makes my job so easy,” said Robert Higginbotham, a mathematics teacher at Champlin Park. “I know if I give the students a task, she’s going to not only stay on task, but also help those around her. And then I can go around and help other students out that need some attention.”

Yet teachers aren’t the only people to recognize her abilities. Earlier in September, she was named a National Merit Scholarship semifinalist for scoring high on the preliminary SAT. Wahl is one of four students in the Anoka-Hennepin School District — and the only one at Champlin Park — to receive the honor.

“I studied all summer for that test, and it was just nice to have solid proof that it matters,” Wahl said.

She’ll find out if she wins the $2,500 National Merit Scholarship sometime in the spring. For now though, Wahl has the rest of her senior year to worry about.

“You know, the sky is the limit with her,” Higginbotham said.