In Golden Valley, the day set aside to commemorate the service of Martin Luther King Jr. Day is becoming synonymous with a dessert called Sweet Potato Comfort Pies. 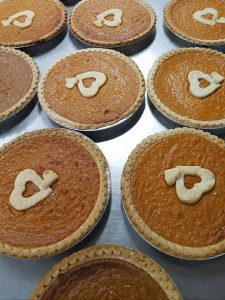 Golden Valley Resident Rose McGee won a Bush Fellowship this past year for her efforts surrounding a mission to “keep your eyes on the pies.” McGee bakes sweet potato pies, which she calls the sacred dessert for black people, and gives them away to people as a symbol of comfort and support.

Community groups like Calvary Lutheran Church in Golden Valley and the Golden Valley Community Foundation have teamed up to host events around the pies. It is a way to celebrate the legacy of Martin Luther King Jr.

“We’d love to have Golden Valley be one of the places where we are focusing on peace, unity and love and all of those good things,” said McGee. “In helping to understand how to bridge the gap between culture and generations. That’s a tough one—getting younger people and older people together in one room to have dialogue. That’s pretty major.”

Volunteers bake pies on Saturday and then participate in a conversation at Brookview Golden Valley on Sunday. McGee says this year the pies the group bakes will be donated to area shelters for the first time. This will include pies delivered to the families affected by the fire at the Minneapolis Drake Hotel.

To learn more about the events, read about the mission of the nonprofit, or even print off the recipe for a Sweet Potato Comfort Pie, click here.