Residents who live near the Brooklyn Center police station have found themselves caught up in the crosshairs of protests and civil unrest.

For three years, Angela Johnson has lived at Sterling Square Apartments, which is across the street from the police department. Johnson’s back yard became the focal point following the tragic killing of Daunte Wright.

“It literally sounds like a war zone here,” Johnson explained. “Bombs going off, fireworks. All the people yelling and screaming. It causes people high anxiety.”

“People are bringing food and water, the community’s coming together. It’s really amazing to see. I love seeing it,” she said.

The Brooklyn Center resident said protestors broke out into disorder because police first shot with rubber bullets and flash bangs.

However, public safety officials say police have been hit with blocks, alcohol bottles and cans during the protests.

“We saw groups choose to throw objects. It started with fireworks, started with lasers being pointed, started with activities that lead toward a riot,” explained Col. Matt Langer, Minnesota State Patrol.

Officials say rioters have even tried to compromise the fence securing the police building.

“As the night unfolded, our team worked together in coordinated fashion to enforce dispersal orders that were given and made many arrests for riots and other criminal behaviors,” said Langer. 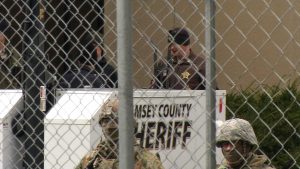 Not knowing what to expect for the upcoming nights, tenants like Johnson plan on getting out of the way.

“There’s a church that came around and offered us a hotel room yesterday,” Johnson said. “We’re going to the hotel tonight to get relief from the noise and high tension.”