A vacant piece of land in Brooklyn Center could soon be the home of a massive car “vending machine” operated by auto retailer Carvana.

The site, located at 1601 James Circle, was once home to an Olive Garden and Cracker Barrel restaurants. For the last 15 years, that five-acre piece of land has sat vacant. However, it has one distinct advantage. 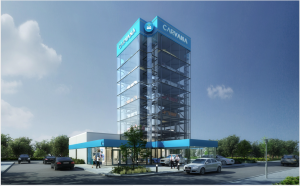 “That site met [Carvana’s] criteria in terms of location and access to major freeways, visibility,” said Meg Beekman, Brooklyn Center’s community development director. “And so, they reached out through a broker and provided a letter of intent for the property.” 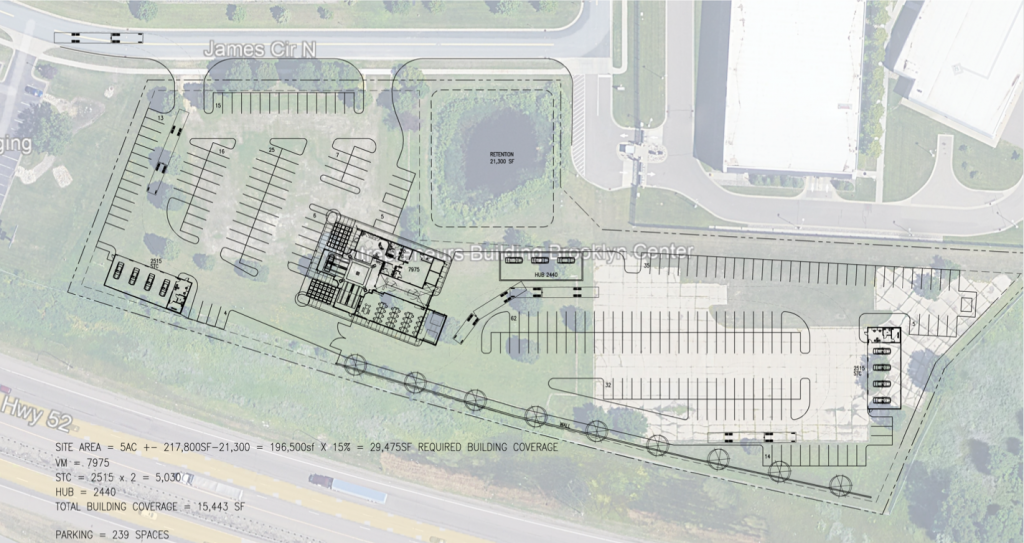 A rendering of the possible layout of the Carvana site.

Carvana is offering to pay Brooklyn Center $2 million to build an eight-tier vehicle vending machine on the site, along with parking for on-site staff and customers. There are no “for sale” vehicles on-site, as all vehicles on display have already been purchased online.

The building would employ about 20 people, with no more than a dozen employees on site at any given time. Although unlike other dealerships, there would be no on-site repair facility.

According to city code, auto dealers in Brooklyn Center are required to provide an on-site repair facility. However, city officials said that the current code likely never considered the possibility of an online-only car dealership. If the city approves the project, Brooklyn Center’s city attorney would have to draft a minor code amendment to remove the requirement for repair services to be offered on site.

Meanwhile, during a meeting on Jan. 24, members of Brooklyn Center’s Economic Development Authority (EDA) raised concerns about the low number of jobs Carvana would generate. Another concern was raised about the tower being built to suit the specific needs of Carvana (i.e., it would be difficult to use the structure for another business if such a need would arise).

But despite the concerns, the EDA approved Carvana’s letter of intent to purchase the property.

“I think with this project there is a degree of excitement because I think it just seems to work for Carvana really well,” Beekman said. “And I think the offer they made to the city was a really solid and competitive offer.”

The project, though, is far from a done deal. Carvana still has 90 days to study the site and conduct their due diligence. Any final approval from the city likely wouldn’t happen until May.

Below is an example of how the Carvana car vending machine works: