Car Wash Could Be Coming to Long-Undeveloped Brooklyn Center Site

Brooklyn Center could get a new car wash where the city had hoped to attract a restaurant. In the June 8 council meeting held via video conference due to COVID-19, Shingle Creek Crossing developer Frank Gatlin said he’s been trying to bring a restaurant to a site near Walmart for a decade with no success. 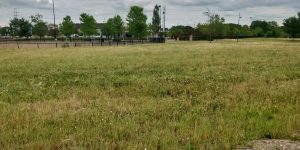 “I have not turned down one possible restaurant,” Gatlin said. “We have tried for 10 years. If you ask me why, it’s a hard one for me to answer because it has all the elements that I’ve been doing for 45 years. With over 75 Walmart centers very similar to what you have there I’ve been very successful in most of them in getting restaurants.”

Gatlin went on to say that he’s gotten feedback from some restaurant companies that the income levels near the site aren’t high enough to support their operations.

The first obstacle to building something else was that the planned unit development (PUD) zone for Shingle Creek Crossing forbade building car washes. That would have to change before the council could even consider approving one.

That was a sticking point for several council members, including Brooklyn Center Mayor Mike Elliott. 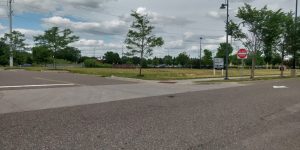 Another view of proposed site.

“I’m not sure it’s the best use of that land at this point,” said Elliott, adding that he hasn’t heard residents say they want a car wash despite other council members and the site’s developer asserting that they do.

Even though changing the PUD would not approve the car wash proposal – that’s a separate process – city attorney Troy Gilchrist did advise council members that if they changed the PUD so that car washes were allowed in Shingle Creek, it would make it legally difficult to turn one down simply because the council didn’t want one there.

After over an hour of discussion, the motion proposed by council member Dan Ryan to change the PUD failed because it didn’t get seconded. But the night wasn’t over yet. Developer Gatlin had pointed out that a car wash attracts 800 to 1,000 cars per day, and with that extra traffic he believed he could more easily convince other businesses to build near it.

Council member April Graves said that if the motion only referenced the specific lot in question, dubbed ‘Site E,’ she’d be willing to support it. Ryan then restated his motion, specifying that it applied to only Site E. At that, Graves seconded and the motion passed 3-1, with only Mayor Elliott still against the idea.

Now that a car wash is allowed on Site E, the car wash developer, Matt Durand, must get a building plan approval and a special use permit before he’s allowed to actually build it. We’ll keep you updated on that process.