Car Crashes into North Hennepin Community College Over the Weekend

It was a rocky start to the week for North Hennepin Community College in Brooklyn Park. A Cadillac SUV ran a red light, then swerved, unsuccessfully, to avoid a car. After crashing into the car, the SUV went off the road and crashed into NHCC’s Bioscience and Health Careers Center. The school is on spring break, so no one was hurt in the crash, and classes won’t be impacted. Police say the driver was not impaired, but was ticketed. 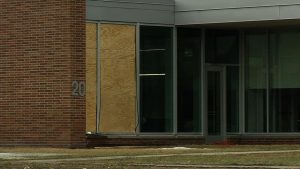 The building suffered two broken windows, some frame damage, and a brick wall in front of the windows was also damaged in the crash. NHCC representatives say they’re working with insurance adjusters to determine a path forward, but the damage is in a common area so classes shouldn’t be impacted when students return from spring break.