Police are still investigating what caused a driver to crash into a Brooklyn Center front yard, striking a tree Tuesday night. At around 11:45 p.m., someone called police to report a vehicle had hit a house near 59th and Xerxes Avenues North. But when officers arrived, they found it had crashed into a large tree instead. 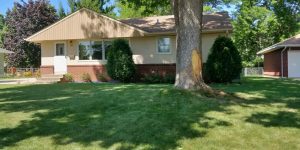 According to police the vehicle had “extensive” damage. Three adult occupants of the vehicle suffered injuries, some of which were serious, Brooklyn Center police said. The three were taken to the hospital by ambulance. Police say one has already been released from the hospital, but officers don’t know the condition of the other two.

Brooklyn Center police are getting assistance from the Minnesota State Patrol to determine why the crash happened. A relative of the homeowner tells CCX they don’t know if the large tree will recover or have to be cut down.