A World Cup cross country ski race scheduled for March 17 has been canceled due to concerns about the spread of coronavirus. The World Cup was part of the Fastenal Parallel 45 Winter Festival, which was slated to begin Saturday and end Tuesday.

The event was to be held at Theodore Wirth Park in Golden Valley. It was expected to draw as many as 20,000 fans with athletes from around the world. 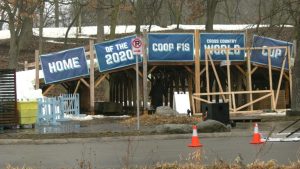 The event was a big deal for the Loppet Foundation, which worked to oversee the event. It would have been the first time in 19 years the United States has hosted a World Cup Ski Race.

“It was very very difficult, we were all ready to go. All the snow was made, all the hard work was done. We were just ready to bring the world to Minnesota and it was just not meant to be,” said Loppet Foundation executive director John Munger. “It’s a tough day here for the Loppet Foundation, for the volunteers and everyone who has been involved.”

Munger said the event was two years in the making. He said it will take at least a week to take apart the event setting. Although the cancellation was a setback for the Loppet Foundation, Munger said he’s positive they’ll get another chance.

“I think International Ski Federation, U.S. Ski and Snowboard and everyone involved from the outside is kind of like ‘hey this is a great partner, this is a great venue, this is some place we really want to be’, said Munger.”I think they saw what a great community we have here. So, I think if it’s something our volunteers want to do and we decide to dive back into, it’s there for the taking, if we’d like it.”

Munger added that there won’t be refunds on tickets.