On any given day, at least 150 people would make their way through the doors of New Hope Bowl for some fun, family entertainment.

“Over the weekend, we were actually really quite busy,” said Tom Bender, co-owner of New Hope Bowl.

When leagues are going, all 32 lanes are generally filled with teams of five, meaning that roughly 160 people could be inside the bowling alley at the same time.

“March and April are typically two of our biggest months,” Bender said.

To keep that many people from gathering in one place at the same time, Gov. Tim Walz issued an executive order to temporarily close entertainment venues — such as bowling alleys — to slow the spread of the coronavirus pandemic.

New Hope Bowl closed its doors to the public at 8 p.m. on Monday. 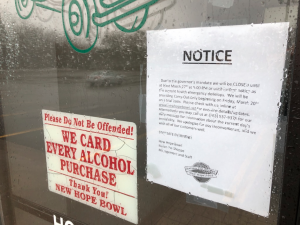 A sign in the window of New Hope Bowl alerts customers of the temporary closure.

“You know, it’s kind of tough not to have mixed feelings about it,” Bender said. “On the one hand, it obviously kind of cramps my style a little bit. We employ 35 people, and it’s tough for me to tell someone I have no work for them. But on the other hand, I think it was probably necessarily, personally.”

While the governor’s decision helps limit the spread of COVID-19, it puts business owners like Bender — and his 35 employees — in a tough spot financially. Bender says that for the time being, he’ll be able to pay the five employees who work more than 30 hours a week, but the other 30 people on staff at New Hope Bowl will have to file for unemployment.

“A lot of the waitress that cocktail waitress for me, they have daytime jobs, and I’m guessing it’s maybe not as bleak for them yet,” Bender said. “But I would expect they could still apply for unemployment for this job, as far as I know.”

Entertainment options outside of the home are few and far between in the northwest metro with COVID-19 cases in Minnesota rapidly increasing, but there’s at least one business in Robbinsdale that doesn’t fall within the guidelines of the governor’s executive order.

‘You come in, get your movies, and you leave’

Video Universe, an independent video store that’s been open since 1985, is still open for business.

“We’re lucky in the respect that we don’t fit the requirements where you’re forced to shut down,” said Troy Rachey, the manager of Video Universe in Robbinsdale.”We’re not a place where you technically congregate in groups. I mean, you come in, get your movies, and you leave.” 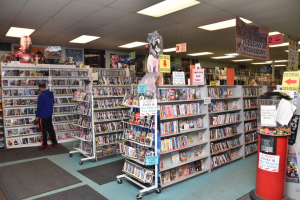 A customer shops for video rentals at Video Universe in Robbinsdale.

While many people rely on streaming services to watch movies or TV shows, Video Universe serves as a throwback to the days when people would have to leave their homes to rent videos.

“I wouldn’t say we’re booming by any extent, but we’re having enough people coming in that need a break,” Rachey said. “Especially with the kids being cooped up, cause they’ve been off for so long. It’s what people view as a safe way of getting out a little bit and stretching their legs and still trying to keep a somewhat normal routine, when possible.”

Rachey says one employee told him he didn’t want to continue working while the Coronavirus threat still exists, leaving Rachey and the owner of Video Universe as the only two people running the store.

“I get it. I shared all the concerns he did about interacting with more people,” Rachey said. “You are putting yourself more at risk.”

In the meantime, Rachey says he’s trying to keep the store as clean as possible by cleaning the counters “religiously,” and he has a sign on the door asking people to stay out of the store if they’re feeling sick. 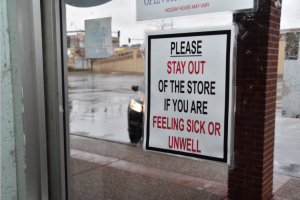 A sign at Video Universe telling sick people to stay out.

Back at New Hope Bowl, people may not be able to bowl strikes during this hiatus, but they’ll be able to pick up pizza when the Italian Pie Shoppe reopens its doors on Friday, March 20 for takeout orders.

“Mostly my concern is this ends up taking several months, in which case then I’m in real hot water, so to speak,” Bender said.

“I think it’s hopefully for the best to try and slow [the Coronavirus] down so that things don’t get overwhelmed.”