Some people are now feeling the burn in Maple Grove. A new fitness facility called Burn Boot Camp opened this past week taking the place of a former IHOP restaurant. Burn Boot Camp offers both coed and women-only classes. Each workout lasts 45 minutes and comes with a little fun mixed in.

“We love the people we work with, but we don’t coddle them. I’m not going to coddle you,” said Washko, a certified personal trainer. “You’re not going to get the gains you want, by having your hand held.”

Washko spent the last four years overseas as a military police officer in Germany. During that time, she also oversaw the health and wellness program for more than 100 soldiers.

“I was told in the military, I was too empathetic,” she said. “So now I am using that empathy, plus the way I was trained, you know, because they keep it hard core out there. “So I want to make sure people feel loved and appreciated, but I want them to know they’re not going to reach their goals in their comfort zone.”

Washko didn’t find Burn Boot Camp. It found her. Owners Tina and Harlan Hegna reached out to Washko to see if she wanted to be the head trainer.

“I kind of just threw my resume out there,” said Washko. “The Hegnas found me. And it was really cool. At first I thought I was at this inspirational speaker’s booth, because they were so passionate about fitness.”

A bond was formed.

“It was their life and their dream and I felt connected,” said Washko. “And I wanted to be part of it.”

The Hegnas fell in love with Burn Boot Camp after trying it out themselves at the Eden Prairie location.

“I was such an independent workout person before,” said Tina Hegna, a mother of twin boys with a third child on the way. “I didn’t think I needed a gym, I ran outside and did my own home workouts. So when I tried Burn Boot Camp for the first time and I felt the transformation, just how I felt about myself in a week, and then how much stronger that feeling got after a few weeks, I knew that this was the place for me. It was different than any other place I tried before.”

“Mission and the values just aligned”

The Hegnas soon realized they wanted to start their own Burn Boot Camp franchise.

“The mission and the values just aligned with what we believed in so much that we just felt strongly that this was something that we needed to do,” said Tina Hegna.

They felt Maple Grove was a good fit after searching to buy a home throughout the west metro. Hegna describes Burn Boot Camp as personal training in a group setting with different workouts for different fitness levels.

“I’m almost 36 weeks pregnant and I’m still working out,” Hegna said. “I still have modifications that work for me.”

And “Burn sisters,” as Hegna calls them, say it’s not just the workouts that make this place different.

“I like it because they make it feel like community,” said Kelly Moore. “I’ve had several people come up to me and ask my name, give me high fives. It just feels more like you’re welcome here rather just walking into a gym.”

“I love the variety, I love that you don’t have to think about it. It’s something new and I just follow along and it helps push me,” said Darci Timothy. 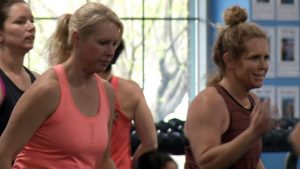 Burn Boot Camp uses a special foam floor, similar to what professional gymnasts use. You also won’t find many machines. Ninety percent of the workouts are done on the floor.

There is a weekly protocol at Burn Boot Camp, so you know whether you’ll be doing upper or lower body. But you don’t know what the moves are until the actual workout.

“One of the greatest things is the workouts are never the same,” said Hegna.

Child care is offered at Burn Boot Camp. Attendees also meet one-on-one with a trainer to go over goals.