Brooklyn Park police have some extra help to prevent crime. The city’s Youth Outreach Team is often used to de-escalate situations before anything terrible happens.

CCX News joined the team last Wednesday night at the Zanewood Recreation Center basketball court. The court was packed with teens and Youth Outreach Team members. The interaction was more than a pickup basketball game.

“We’re just trying to preemptively build relationships and engage with them in spaces that are welcoming and comfortable for them,” explained Brooklyn Park Youth Outreach Team member Matt Branch.

The six-member team, also known as “the Blue Shirt Crew,” is out in the community Monday through Friday from 4 p.m. to 9 p.m. interacting with young people. The Youth Outreach Team started about three years ago and is part of the Recreation and Parks Department.

“I didn’t have a father figure growing up, but I had a lot of awesome male role models in the community in my family, and if I can be that to them, that fills me up,” said Wendell Johnson, a member of Brooklyn Park’s Youth Outreach Team. 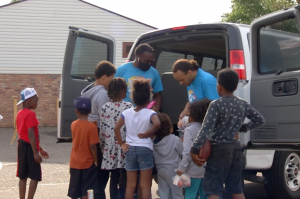 Brooklyn Park Youth Outreach Team members have conversations about peer pressure, respect and character. They say nothing is off the table, including talking about the relationship between cops and young men of color.

And what do they tell kids who are afraid of the police?

Shaking his head, Johnson said, “That’s a tough one. I do not have the answer for that one because, in certain instances, I can see why they would be afraid.”

The team also hits the streets, handing out snacks and engaging with the community’s youngest members. Steams of children poured out into the road as the team’s white van pulled into the Autumn Townhomes complex. This is where the preventative part of the group’s mission kicks in.

“We know who they played with, who they grew up with, and what schools they’ve been attending,” said team member Kable Reid.

‘A Different Type of Engagement’

The team has a pulse on what’s happening in the city. If there is a situation and teens are involved, instead of the police responding right away, they sometimes call in the Blue Shirt Crew. Law enforcement officials say they appreciate the extra backup, especially since the pace of violent crimes is up this year.

“Total people hit by gunfire in all of 2020 was 38, and so far it’s 10 this year,” said Brooklyn Park police Inspector William Barritt. “[The Blue Shirt Crew] frees us up, and it’s just a different type of engagement that can be done without the police being needed at all, and it’s good for the community.”

While with the Youth Outreach Team, CCX News witnessed a heated argument between two young men outside the Zanewood Recreation Center.

“It got very aggressive and hostile. So, we jumped in, got in between the two, and immediately embedded into what’s going on here,” said Reid.

That allowed the Blue Shirt Crew to get involved and have a rational conversation with the two young adults. The situation might have ended much differently without the adult mentors stepping in.

The Blue Shirt Crew says they want to provide an alternative outlet where young people don’t have to worry about the streets or home life pressures and know some adults care.