The city of Brooklyn Park is looking more colorful these days because there’s a new water tower design. 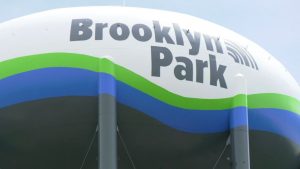 The water tower, located next to Birch Grove Elementary on Brookdale Drive, used to be coated in just plain white. Now it has the city’s updated logo. The green and blue waves are meant to be a play off of the thumbprint seen on the logo. The waves also acknowledge the Mississippi River.

City staff say the Brooklyn Park water tower is one of the city’s oldest utility assets. It was originally built in the 1960s.

“Most of the effort was the cleaning and blasting of the old paint and priming,” explained Jon Watson, the city’s public utilities superintendent. “It had to be done immediately so the steel would not rust. That work took over a year just to get the primer off. Then to paint the finished coats on actually only took a few weeks.”

The project cost a total of $1.6 million. The cost to do the design and special paint itself was estimated at $40,000.

Watson hopes eventually the two other Brooklyn Park water towers will also get a facelift.