Brooklyn Park: Too Many Homeowners Encroaching on Park Land

Do you know where your property lines are? That question has become an issue the city of Brooklyn Park has started to wrestle with.

According to Brooklyn Park city officials, there are numerous violations of homeowners using or building onto city-owned park land. Some issues date back decades. And in other cases, homeowners might not know they’ve extended over their property lines.

Some of the most serious encroachments include pools, sheds or hockey rinks built or partially built on park property.

“It’s not okay,” said Brooklyn Park City Council member Tonja West-Hafner during a meeting Monday on the issue. “At some point or another, someone is going to figure this out. Right. Whether it’s a huge boat sitting in park land or somebody’s hockey rink or whatever. At some point, it’s not your land. You can’t just use however you want.”

The city found 146 known encroachments on city-owned property. They range from mowing and tossing grass clippings onto park land – the least serious violations – to building permanent structures, in which there are at least six known cases. The most common violations are movable structures, such as swing sets and trampolines, found on park property. There are 81 of those type of encroachments.

Katie Zarembinski helped conduct the research for the city.

“There are a lot of properties in Brooklyn Park that are substantially increasing their property lines through mowing or clearing of vegetation,” said Zarembinski.

The problem is currently addressed on a per complaint basis. According to Jason Newby, the city’s inspections and environmental health manager, Brooklyn Park averages about three to four complaints per year. However, the city could soon take a more proactive approach. 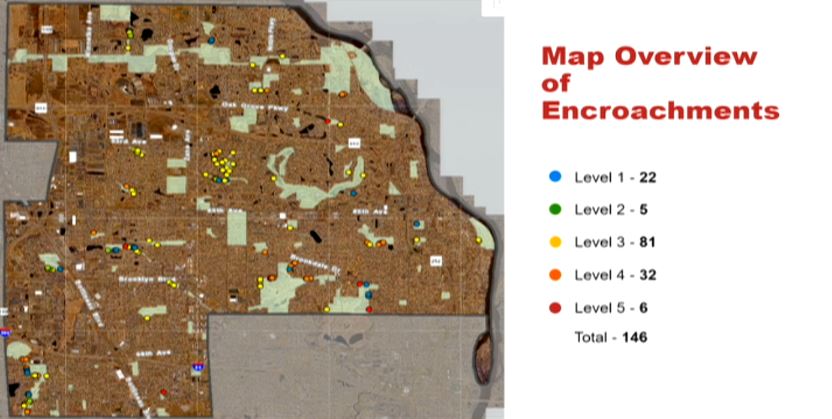 ‘We Have to Stop It at Some Point’

At Edinburgh USA golf course, a city irrigation installation project found issues of encroachment involving neighboring homes. In another instance a homeowner wanted to put in a pool just like a neighbor did. It turned out that neighbor’s pool was halfway built on park property, which the city approved a permit for in 1982.

“To be honest, it’s not their fault,” said Jody Yungers, Brooklyn Park’s recreation and parks director, noting that technology used to help determine property lines wasn’t available back then.

Yungers says another issue came up during a 2019 home sale when it was discovered that a fire pit and other amenities were on park property. A new buyer ended up purchasing the encroached property from the city.

The city’s report also found a cluster of violations in the Trinity Gardens neighborhood.

“What happens is monkey see monkey do,” said Yungers. “We have to stop it at some point.”

Today’s mapping technology has helped resolved some of the boundary issues that came up in prior decades.

“It’s not perfect. It’s not absolutely precise,” Yungers said about today’s technology. “The GPS is pretty close. We’re thinking it’s within a foot for sure.”

A Push for a ‘Neighborhood Sweep Program’

City council members expressed interest in stepping up enforcement to get ahead of Brooklyn Park encroachment issues. The city’s goal is to have a consistent approach to handling complaints.

“I do believe that those things are not deliberately done,” said Brooklyn Park City Council member Boyd Morson.

One possibility could include following a rating scale in which the city would enforce only the most serious encroachment violations. The city council leaned toward a different option that would try to correct all violations through a “neighborhood sweep” program through the city’s Environmental Health Department.

While supporting enforcement action, Brooklyn Park City Council member Susan Pha raised concerns about people not having the financial means to make significant corrections. She proposed a time period of up to 12 months to fix serious violations.

Unlike other code violations, the city currently does not have a fine structure for encroachment violations. That possibility for enforcement remains under discussion.

City officials, meanwhile, said they expect to have an extensive communications campaign on whatever they ultimately decide to do.

“The last thing we want to do is create conflict within our community,” said Yungers.