Brooklyn Park police say they’ve located a 16-year-old girl first reported missing on December 20. Police released a brief statement on Wednesday saying Jymirah Chatman was located in Detroit with the help of the FBI and Michigan State Police at 10 p.m. the night before.

Police also say the man she was with was arrested for depravation of parental rights and is awaiting extradition back to Minnesota.

Police say Jymirah Chatman was last seen on Dec. 19 at her Brooklyn Park home, and had left a note indicating she was leaving, but that she would return.

At that time, police said she was with a man from Detroit named Jorj Austin and was also involved in a single car accident on I-94 near Mauston, Wisconsin. 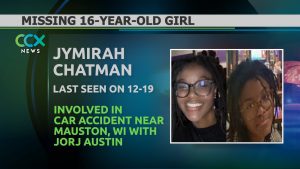