Several northwest metro police departments are asking residents to be vigilant due to a record number of catalytic converter thefts.

“Criminals are pretty brazen and in committing these types of crimes. They’re traveling all over the metro area,” said Maple Grove police Cmdr. Jonathan Wetternach.

Police say thieves like to steal catalytic converters for the precious metals inside the canister and then sell them on the black market.

Some of the top sought-after vehicles by criminals include the Ford F-250, Toyota Prius, Toyota Tundra, Honda Accord and Honda CRV. 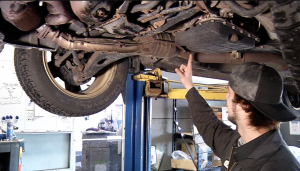 To help prevent catalytic convert thefts, police say don’t park on the street. But if you have to, make sure the area is well lit. Another helpful option to track the crime is having an auto shop engrave the vehicle identification number on the converter.

The Minnesota Department of Commerce has a pilot program where service stations install so-called “CatGuard” labels on the 15 most at-risk vehicles for catalytic converter thefts. Golden Valley Tire and Service is participating in the program.