According to police, a man was meeting a friend at the park and trying to leave when two cars blocked the entrance. Shortly afterward, gunfire erupted.

“An individual stepped out from one of those cars and began firing rounds. One of the rounds did strike the vehicle in the windshield, very near where the victim would have been sitting,” explained Brooklyn Park Police Inspector Elliot Faust. 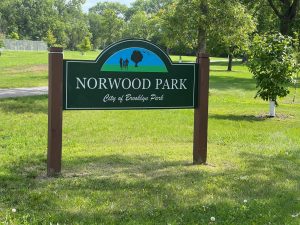 He said officers found many spent bullet casings when they got on the scene. Police aren’t sure whether an automatic weapon was involved.

“Twenty rounds in a short period of time is a lot to be fired,” said Faust.

Typically, Norwood Park is peaceful. Many people walk their dogs or hit a few rounds on the tennis courts. But this year, there have been seven criminal incidents at the park so far this summer, compared to just two the previous year. Some residents are on edge.

Brooklyn Park police are seeing increased violence at several parks throughout the city, including Brookdale Park. Police installed a mobile trailer camera, increased patrols, and blocked off parking lots to cut down on criminal activity.

“We can’t be everywhere at all times. So, we’re going to redirect those resources to focus more on the parks that we know need attention,” said Faust.