According to Brooklyn Park police, officers received calls of shots fired around 3:42 p.m. at a strip mall near Brookdale Drive North and Yates Avenue North. When officers arrived on the scene, they found a man inside a car with multiple gunshot wounds. Bystanders could see bullet holes in the window and the doors in the parking lot.

In a press release, police say preliminary information indicates the shooter walked up to the parked car and fired at the victim while he was sitting in the vehicle. Police believe the shooter then fled on foot. 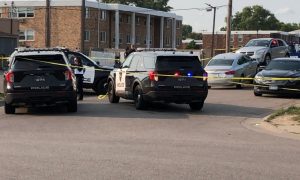 “We located a 17-year-old male in the backseat with numerous gunshot wounds. We rendered aid to that individual and immediately transported him to the hospital where he was later pronounced dead,” said Deputy Chief Mark Bruley.

Brooklyn Park Police believe more than one gunman is involved and don’t think the shooting is random. There are no suspects in custody. If you have any information call police.