Meanwhile, police are seeking a man identified as Keyshawn Lemont Cosey-Gray, age 20, for his involvement in the shooting. Anyone with information about his whereabouts is urged to call 911. 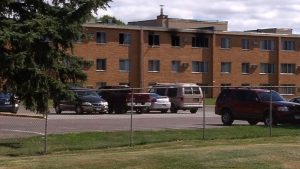 Police were called to the Huntington Place apartment complex shortly after 7 a.m. Thursday on the report a child shot. Officers provided first aid and CPR to the boy upon arrival. At last check, the child remains in critical condition at a local hospital.

According Brooklyn Park Deputy Chief Mark Bruley, numerous adults were inside the apartment when the child was shot. Those people gave conflicting accounts of what took place prior to the shooting, Bruley said.