A Brooklyn Park resident sprang into action to stop the spread of a house fire Sunday night. The fire started shortly before 10 p.m. Sunday on the 7900 block of Brunswick Avenue North.

“It was a pretty well-engulfed fire, mostly in the garage area, extending into the house,” said Cunningham. 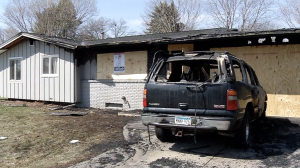 Crews from several departments across the west metro help to put out a house fire in Brooklyn Park Sunday night.

Investigators were back on the scene Monday morning, looking through charred debris to determine how the fire started. Cunningham says he doesn’t believe there’s anything suspicious about the fire.

Neighbors say it was scary watching the flames shooting from the roof.

“Huge, huge, it was pluming,” said neighbor Diana Larson. Her son quickly jumped into action to prevent the fire from spreading to their home.

“My oldest had grabbed our garden hose trying to water our fence from the back because it was getting really close.”

The fire destroyed the home where it started. All the residents who lived there were displaced and are getting assistance from the Red Cross.

I am so thankful for the quick response of @bpfire and @BPPD to a house/vehicle fire two houses down from me. Actively working to put it out now. pic.twitter.com/9TeIVSPevb

Meanwhile, Brooklyn Park fire crews also fought a fire Saturday around 3:00 p.m. at a condo complex in the 7600 blocks of Hampshire Avenue North. The fire was contained to one unit.

Fire officials say everyone made it out okay, including an infant. The cause of the fire remains under investigation.