A Brooklyn Park man accused of fleeing police and firing shots at a Golden Valley officer is now charged with multiple felonies, including attempted first-degree murder of a peace officer.

Marlon Collins, 30, was arrested after a 911 caller in Golden Valley reported an attempted home break-in.

The criminal complaint says Collins was dressed in all black. Police eventually found him hiding behind a bush in a residential back yard.

Prior to the arrest, the complaint says Collins got in a vehicle near the 3000 block of Lee Avenue. That vehicle sped away on residential streets reaching speeds near 70 miles per hour. The vehicle crashed into a snowbank several blocks away near 37th and Major Avenues North.

The complaint says Collins got out and began firing at police, started running, then fired more shots at a Golden Valley officer. The officer was not hit, but one of the rounds struck the officer’s squad vehicle.

The complaint states that Collins had broken into multiple homes, including one where he hid a pistol in the rafters of a garage. That pistol was equipped with a laser sight and a “switch” converting it into an automatic weapon, the complaint said.

Police also found two small safes reported stolen in the vehicle in which he attempted to get away.

Collins has a 51-page criminal history, most recently serving time for second-degree burglary. 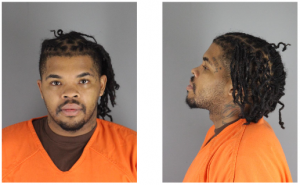