Zaria McKeever’s family says they want justice. The 23-year-old Brooklyn Park woman was fatally shot on Nov. 8 in a case connected to her former boyfriend.

Her sister says she will never get over the hole left in her heart.

“I just didn’t want to believe it, said Tiffynnie Epps, Zaria’s older sister. “We are literally together every single day. So, it’s like crazy and different.” 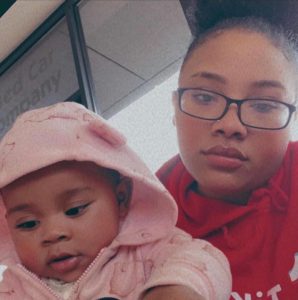 Zaria McKeever and her 1-year-old daughter.

Pictures and videos are reminders of the good times the two shared.

“Just thinking about her smiling and her laughing, and you know, makes me smile,” said Epps.

Epps said her sister, a Champlin Park graduate, was a makeup artist and loved to draw. She also enjoyed making TikTok videos with her family. Epps is now taking on the role of mother for Zaria’s 1-year-old daughter. But she says nothing can replace her niece’s mom.

“She has been acting a little different. She goes to the window sometimes and looks, or if people are coming to the door, she’s running over there to see exactly who it is,” explained Epps.

Instead of preparing for the upcoming holidays, the family is instead planning for Zaria’s funeral.

“I can’t believe they took her away from us,” said Epps.

Zaria McKeever’s family set up a GoFundMe to help pay for funeral expenses and expenses for her young daughter.