The Brooklyn Park City Council gave initial approval for the rezoning of a property that would make way for a future business park. 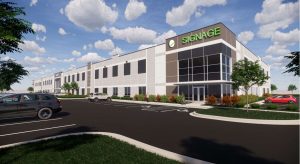 Hempel Real Estate is proposing to construct a 75,000-square-foot property on the very north end of Louisiana Avenue, just south of Highway 610. The site is across a cul de sac from the Olympus Surgical Technologies America campus

According to Brooklyn Park city officials, the building proposal is much smaller than nearby business parks.

“It’s a little different than some of the other buildings we’ve seen most recently, which are much larger,” said Cindy Sherman, Brooklyn Park’s planning director.

For comparison, the 610 Commerce Buildings to the south are 202,000 square feet. The design, however, would be similar to other buildings along 610 with a mixture of tilt-up panels, metal panels and glass.

In recent years, the Brooklyn Park Planning Commission and Brooklyn Park City Council have desired a higher density of jobs along the 610 corridor. The Hempel project would cater to potential office, warehouse or manufacturing clients. It’s being developed for multitenant use, but could also serve a single tenant.

“Ideally this facility would have up to three tenants,” Sherman said.

The city council voted 7-0 for a rezoning change that give the developer greater flexibility. The zoning requirements still prohibit distribution centers, which the city views as lower job density and much higher truck traffic.

Final approval is expected at the council’s first regular meeting in June.