Dr. Patrick Lilja is a giant in paramedic and EMT circles. According to North Memorial Health, Lilja is known as the “father of emergency medicine in Minnesota.” He helped shape training methods for the state’s first responders.

To honor him, the Brooklyn Park EMS training facility on Edinbrook Parkway has been renamed after Dr. Lilja. The building will be known as the North Memorial Health G. Patrick Lilja Training Center.

“I got into this actually almost 50 years ago. Actually, when I finished medical school I did a residency at Hennepin County Medical Center and I was one of the first two residents in their emergency medicine program,” said Dr. Patrick Lilja, director of North Memorial Health Ambulance Services.

Lilja has worked for North Memorial Health for 40 years. In his role, he has seen over half a century of innovation and progress in emergency medicine. 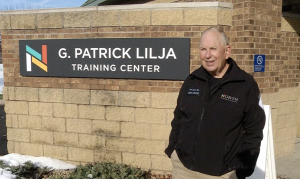 The longtime doctor is not stepping down in his position. He still enjoys teaching and has delivered talks at a number of national and local medical and EMS conferences. He has helped train thousands of first responders, EMTs, paramedics, and nurses.

“It’s an honor to have this named after me particularly because it’s education,” said Dr. Lilja. “And I’ve always felt that education is key to what I’ve done over the years and key to training people for the future in terms of providing good health care for our citizens of Minnesota and for our country,”