Anti-Asian hate crimes are growing nationwide. The bias and discrimination rhetoric are prompting Brooklyn Park City Council Member Susan Pha to take action. She recently spoke at a rally outside the Capitol in St. Paul, saying people must call out anti-Asian hate  when they see it. Pha also spoke about her own experiences, saying she’s felt negative bias before at local stores.

Pha is the only Hmong American on the Brooklyn Park city council and she was also the first person of color elected to the council.

“It is unacceptable not to call some of the violence that has happened to our Asian community not a hate crime when we know that it is,” Susan Pha said. 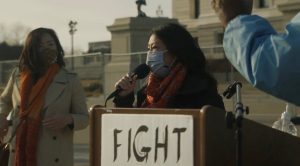 The lawmaker says she, too, has faced bias while going about her everyday activities.

“I was standing in line at Costco, and you know, everybody is wearing masks, and the lady in front of me, for no reason that I can think of, turned around, looked straight at me, and gave me the most dirtiest looks,” Pha explained.

Although this is minor to what is going on across the country, the incident still haunts her today.

She and others in the Asian community are also taking precautions to protect their children.

“Last year, we chose to keep our kids on distance learning because we knew that our kids might be bullied or harassed in school,” said Pha.