A Brooklyn Center woman who eluded authorities for more than two years is now in police custody in the Twin Cities. Mai Vang, 51, is accused of orchestrating a fraud scheme in which she duped victims into investing in a nonexistent ginseng farm. 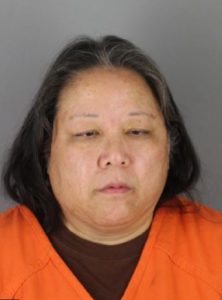 Vang is being held in the downtown Minneapolis detention center on $500,000 bail. She’s set to make her next court appearance May 14. Vang is charged with six counts of theft by swindle.

According to the Hennepin County Attorney’s Office, Vang was arrested in Georgia on March 18. She was extradited to Minnesota over the weekend.

Her arrest apparently came during a traffic stop, more than two years after Minnesota authorities filed an arrest warrant on theft-by-swindle charges, the attorney’s office said. Local police officers in Georgia had tried to contact Vang numerous at an address they suspected was her address, but were unsuccessful until the traffic stop.

An investigation by the Minnesota Commerce Fraud Bureau and local police revealed Vang concocted a fraud scheme that took advantage of members of the Minnesota Hmong community. According to the charges, Vang persuaded the victims to invest in a ginseng farm she claimed to own near Wausau, Wis. The fraud involved nine victims with losses totaling more than $450,000. Two victims are a couple Vang knew from church who gave the suspect their life savings, the complaint said.

Vang used the scam proceeds for casino gambling, police records show. According to the complaint, records from Mystic Lake Casino showed Vang spent nearly $1 million to buy chips or play slot machines between 2012 and 2014. Records also show she allegedly spent more than $27,000 at Running Aces Casino, Hotel and Racetrack in 2014, the complaint said.