The Brooklyn Center City Council has agreed to transition the city’s acting city manager into a permanent role. A vote to finalize a contract is expected at its next meeting.

Reggie Edwards has served as acting city manager since April 12. That role followed the firing of former city manager Curt Boganey, who the council let go one day after the fatal shooting of Daunte Wright by a former Brooklyn Center officer during a traffic stop.

Brooklyn Center Mayor Mike Elliott pointed to “new ways of thinking” by Edwards in reaching a conclusion for a permanent appointment.

“We are in a position right now to really solidify the work that Dr. Edwards has led in our city,” said Elliott during the June 28 council meeting.

“I believe we need continuity of leadership right now, particularly based on some of the staff feedback we had, and as far as some of the unrest within the organization right now,” Lawrence-Anderson said. “I believe Dr. Edwards has done a wonderful job and will continue to do so.”

Brooklyn Center City Council members directed the city attorney to draft resolution for final approval at their next city council meeting. The resolution will include a contract. There were no details on pay presented in council documents or discussed during the vote. Those details are expected at the next meeting.

Edwards previously served as Brooklyn Center deputy city manager. He lives in Mankato and was a former professor at Minnesota State University in Mankato.

You can listen to the full discussion here. 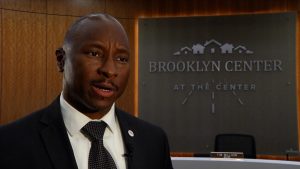