If there’s a snowstorm in the next month or so – which in Minnesota you can never rule out – a new ordinance approved in Brooklyn Center will impact towing. The Brooklyn Center City Council passed a resolution on Monday to suspend towing during snow emergencies. The change will last until the end of the Governor’s COVID-19 state of emergency or until the council makes another change. The item was on the city’s consent agenda, which didn’t require further discussion. 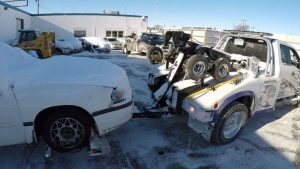 Brooklyn Center Mayor Mike Elliott says the moratorium is needed because of economic hardships during the pandemic. It costs around $150 or more to get towed vehicles out of an impound lot.

Brooklyn Center passed an ordinance in 2018 that if it snows more than 2.5 inches, no on-street parking is allowed until roads are plowed curb to curb. That ordinance is now on hold until further notice.