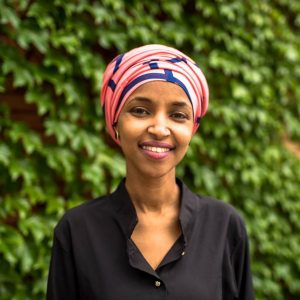 Omar is a political trailblazer. For Somali-Americans she is a hero. One day before the election seventh-grader Seham Hayvre was excited about Omar’s chances.

“I feel like she can make Minnesota better and she can help us,” Hayve said. “She believes equality for everybody.”

Hayve’s excitement turned into joy on Wednesday after Omar got elected to Congress.

“My friends have actually been talking about her a lot,” Hayve said. “Everybody’s happy in some way.”

Hayve is ecstatic that Somali-Americans will have a voice in Washington, D.C.

“People will be more expressive about themselves,” Hayve said, “and want to look up to her and maybe be like her.”

For Hayve and other minority students, Omar is proof that anyone from any background can rise to the top.

“This election specifically has validated not only Seham and our Somali community, but our entire student population,” said Brooklyn Center Principal Josh Fraser. “

“It’s amazing to have all of these people from different backgrounds, races, class, gender to show to students as people they can become in a few years,” Nicosia said.

Omar’s story is an American dream. She went from Somali refugee to U.S. congresswoman-elect, overcoming barriers and becoming an inspiration to many.

“When you see somebody that represents you and your beliefs and the way that you grow up, the way you speak, the way you practice religion, it gives you a visual for your future,” Fraser said.

Brooklyn Center school administrators have reached out to Omar, inviting her to visit campus some day.