A party over the weekend at East Palmer Lake Park in Brooklyn Center has upset some neighborhood residents.  A couple of them said it was a rowdy gathering with loud music, an overflow crowd and a lot of garbage left behind.

“It’s a little disappointing,” said Brian Richison, who visits the park often. “I try to come here daily just for nice walks. You want to be able to have a nice safe place to go to. So it’s kind of frustrating to hear of things like that.” 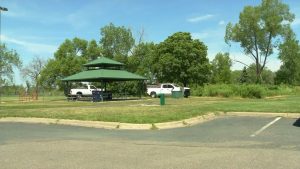 One person told CCX News off-camera that even though the park closes at 10 p.m., the the party-goers were at East Palmer Lake Park past midnight. Among the items left behind was a grill and a car bumper.

“Every once in a while you’ll see all kinds of just garbage laying there,” Richison said. “Not necessarily just like a water bottle. You’ll see big objects laying here and there and scattered about the park on the trail. It didn’t just show up out of the blue. Somebody had to bring it there and leave it there. It’s frustrating when you have a nice place to go to.”

Meanwhile the city of Brooklyn Center is downplaying the big bash at East Palmer Lake Park. One official said there was a little more trash than usual, but nothing more than your typical weekend. The official noted that garbage can needed to be emptied and there was garbage in the parking lot.