Brooklyn Center now has more money to address health disparities in their community. Recently, the city received $100,000 in federal funds to help with its health initiative. According to the city, they would use the money to transform parking lots and other facilities into temporary bike parks where young people could get out and enjoy the great outdoors.

“They come up and down. If it’s in a hockey rink, the hockey rink would be used in the winter. We’d convert it into bike ramps in the summer,” said Brooklyn Center Recreation Director Cordell Wiseman. 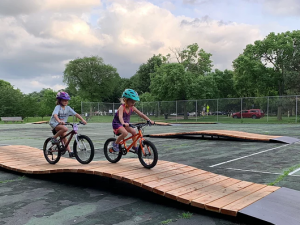 An artist’s rendering of the temporary bike park in Brooklyn Center.

The recreation department is already installing a bike park at West Centennial Park.

With the additional $100,000 spearheaded by Congresswoman Ilhan Omar, the city plans to build three more parks. It’s estimated, the equipment would cost at least $20,000 for each bike facility.

“The more that we can do in the community and the more amenities like this that we can add will help everyone have healthier lives,” said Recreation Supervisor Janelle Crossfield.

The bike parks will be close to regional trails and designed for all skill levels. The first park is scheduled to be completed in June.