Stored on shelves inside the Brooklyn Center Police Department, there’s equipment similar to what you would find in a local boxing gym. Except this gear isn’t used for a workout.

Since January 2019, Brooklyn Center police have used boxing headgear to protect passengers riding in the back of squad gears.

Brooklyn Center police Cmdr. Garett Flesland says people sometimes try to hurt themselves by banging their heads against the partition or even the window, potentially causing great harm to themselves.

“A lot of times, it might be people with mental illness or some kind of emotional crisis. It could be people seeking attention,” said Flesland. “Sometimes, people believe if they’re hurt, they can’t go to jail. They have to go to the hospital, which is true.”

The department has used the headgear at least several dozen times. And police say it seems to be working.

“It kind of takes the wind out of their sails and they’ll stop hitting their head,” said Flesland. 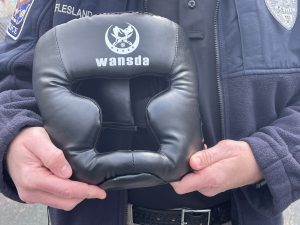 Brooklyn Center police are using boxing headgear to protect some passengers riding in the rear of squad cars.

One of the Brooklyn Center officers came up with the idea using the boxing protection. Brooklyn Center police also say they won’t use the headgear on someone if it will impede breathing or bother an injury.

In the past, officers have had to hold a person’s head to prevent them from hurting themselves. Police say this is another tool in their toolbox to keep people safe.

“They’ve just become one of our essential disposable pieces of technology that we use to help keep people safe,” said Flesland.