Three suspects are now charged, including one accused of firing multiple shots, in a shooting incident that seriously injured a woman late Monday night. It happened near the Speedway gas station near Bass Lake Road and Highway 100.

According to the criminal complaint, the woman had been shot in the neck and was taken to North Memorial Health Hospital. The complaint says doctors had to remove a bullet that was “lodged near her C2 vertebrae” and the entrance wound was “near her brain stem.” 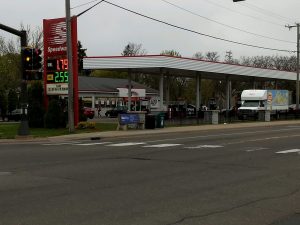 Brooklyn Center police arrested Darrian Bryant, 21, of Brooklyn Center, on Tuesday. Members of the Hennepin County Violent Offender Task Force arrested William Taylor, 23, of Crystal, on Wednesday. An arrest warrant is out for a third suspect, Tremaine Bucholz, 23, of Minneapolis. All are charged with first-degree assault.

Video surveillance caught images of a white GMC SUV near the scene and a suspect getting out of the vehicle and firing shots in the vicinity of the gas station, the complaint said. Police tracked down the SUV about a mile away.

In a post-Miranda statement, Bryant admitted going to the Speedway gas station, but denied shooting anyone, the complaint said. When told the shooter was seen on surveillance, Bryant claimed to “have switched seats” with the suspect identified as Taylor. He said he “was in the car” when the shots went off, the complaint said.

In the complaint against Taylor, the Crystal suspect admitted giving a firearm to Bryant prior to the shooting. The motive for the shooting is unclear. The investigation continues to be active and ongoing.

The maximum sentence for the felony-level charges are 20 years in prison.