Masjid Al-Ansar Islamic Community Center wants to relocate to a property on France Avenue North in Brooklyn Center that’s currently zoned as industrial use. The city is concerned there’s not enough space for parking during peak times of use. 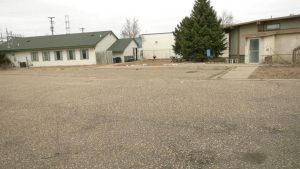 Masjid Al-Ansar used to lease space from an office building at 5637 Brooklyn Boulevard, but needs to find a new place to worship after the building had a change in ownership. They found 4900 France Avenue North, which has been vacant for several years. There are two buildings on the property. One used to be a pet groomer and veterinary clinic. The other building is circular and used to be an animal hospital.  However, the buildings are not in good shape.  One has water damage from this past winter and needs work before it can be used. The circular building can not be occupied until it is brought up to code and has a sprinkler system installed.  Each building is about 4,000 square feet.

The applicant would like a special use permit for the property to use as a worship space, gathering and event space, and office space. There would be youth programs too.

Is there enough Parking?

But the city has expressed concerns about parking during peak times of use. There’s only 27 on-site parking spaces and the city says that’s not enough.  In Brooklyn Center, religious and other places of assembly require one parking space for every three seats; industrial zones require fewer spots. A parking study revealed 70 vehicles in the Masjid Al-Ansar parking lot during the period of study.

Mosque leaders and the city have investigated solutions like further splitting prayer services, shuttle services, carpool-only parking, and on-street parking nearby.  Currently the mosque meets at the Brooklyn Center community Center for one Friday prayer service and typically sees between 120 and 150 attendees. The intent is to split the 120 to 150 person membership into two Friday prayer services.

The city says this is the first religious use seeking to relocate into Brooklyn Center’s heavy industrial district and the matter is a perplexing one. The planning commission was deadlocked in a 3-3 vote to recommend approval, something council member Kris Lawrence-Anderson remarked as extremely rare.

A Desire to Stay in Brooklyn Center

“We can only add to this city. We can’t take away from the city,” said Dukuly, who went on to say the city is unique because people are not segregated. “Every other house has another person in it. This is very unique. Don’t lose that by way of doing something to drive us out.”

The city council voted for staff to develop a resolution for approval on the March 23 meeting agenda.

To read more about this item in the council agenda, click here.