Barbara Gusse was out filling her bird feeders Saturday when she saw a white Jeep Grand Cherokee parked across her street. The vehicle was near Cross of Glory Lutheran Church. 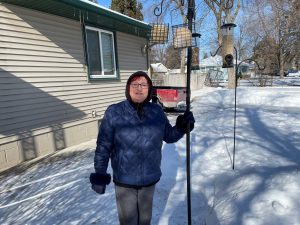 Barbara Gusse next to her bird feeders.

About 20 minutes after she spotted the car, an Amber Alert went off describing that a jeep was stolen in north Minneapolis and a 1-year-old was in the back seat. Gusse took out her bird watching binoculars and matched the license plate to the Amber Alert information. That’s when she called the Brooklyn Center police.

“When the one officer went and took the car seat and took the baby, I could see a glimpse of that little face and I lost it. I was shaking and crying,” said Gusse.

Some are calling Gusse a hero, but she says anybody would do what she did.