Brooklyn Center firefighter Korboi “KB” Balla was in the process of opening a sports bar in south Minneapolis when vandals destroyed the property during the civil unrest following the death of George Floyd. When President Trump visited the Twin Cities last week, he invited Balla to speak about his bar and the experience. So far a GoFundMe page to rebuild Balla’s bar has raised more than $1.1 million. 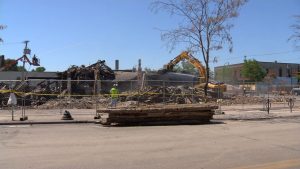 A Brooklyn Center firefighter planned to open a sports bar in south Minneapolis this past spring. Vandals set fire to the location during the civil unrest.

Balla told CCX News that he can’t believe what a tough year 2020 has been. He had plans to open a sports bar in south Minneapolis, but his plans were put on hold by COVID-19 in the spring.

“There was a lot of sweat equity put into the location,” said Balla.

Then, his plans became even more indefinite. The civil unrest following the George Floyd killing resulted in vandals destroying his property. Balla took his family to see the destroyed building afterwards.

“Even my little son, my youngest. He’s 6 years old. When I took him to see the restaurant after it was burned down he was so angry and mad. Why did they do this to my dad’s place,” said Balla.

The family was devastated, but news of Balla’s misfortune spread. A GoFundMe page started to generate donations. Then, he got a call from the commander-in-chief.

On a recent presidential visit to Minnesota, Balla got a chance to meet the president. He and his wife, Tawanna, met the president on the tarmac at the Minneapolis-St. Paul airport.

President Donald Trump asked Balla about the event and his plans to rebuild. The president even hinted at helping with a comment of  “maybe we can help you out a little bit.”

Balla said the experience of meeting and interacting wit the president is one he will not forget. He prayed about the visit and spoke with his pastor about it too before the meeting.

“I’m not into politics,” said Balla. “I didn’t want to speak on something I didn’t know about. The biggest concern was just going on there and talking about my business and what I’ve been through.”

Balla has been touched by the overwhelming support, both from the presidential attention and the money raised.

“I could have never imagined in a million years that I was ever going to raise this much money,” said Balla.

What’s next? Balla says he’s currently scouting out locations for his new sports bar. If all goes according to plan, it could open in the spring of 2021.