A farmers market is a community enterprise.

“Everybody helps out. It’s a family thing,” said Panya Yang. 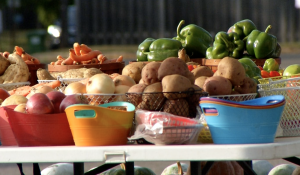 Yang has been running the Brooklyn Center farmers market for the last four years. He enjoys talking to people when they purchase produce.

“I sell some stuff that even I don’t know how to eat, but because it’s so popular to a certain community. And when they buy it, I just ask them questions because I’m curious,” said Yang.

No matter what you find at the market it will be extremely fresh.

“We were just driving by and she said we should stop here. And it’s pretty nice. Usually we’ll get some greens and usually get some American corn. I love the corn,” said Trokan Dunbar, who came with his family.

It’s vendor Yong Yang’s first year at the market. Yang says the flow of shoppers is moderate, but steady.

“Right now I have tomatoes, carrots, cilantro, beets, flowers. All my flowers are gone,” Yang laughed.   Panya’s family is from Thailand. They grow much of their own vegetables and often have lots extra to bring to the market.

“When other people buy from us too it makes us happy too. We grow locally and everybody likes local food. We just want to help out as much as we can too,” said Yang.   The market is conveniently located in the Brooklyn United Methodist church parking lot off Brooklyn Boulevard.

Panya said they’ll be out every Thursday until it gets really cold or snows.