The name of one of Brooklyn Center’s most famous residents, Earle Brown, is seen at locations across the city. Brown died in 1963. He helped settle the city, is a former Hennepin County Sheriff, and is credited with the founding of the Minnesota State Highway Patrol.

But a book written by Elizabeth Dorsey Hatle connects Brown to a painful past. Hatle’s book, titled “The Ku Klux Klan in Minnesota,” alleges Brown was a member of the KKK in the 1920s when he was sheriff. Pages 83-98 of the Brooklyn Center City Council packet showcases the claims. Notes on page 83 in the city council packet say another historian disputes the claims. 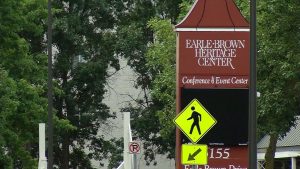 “I think that the issues that have been raised about his character are very serious,” said Brooklyn Center City Manager  Curt Boganey. “They’re very concerning to the city council.”

CCX News caught up with people in Brooklyn Center to capture their feelings.

“Our kids don’t need to see things like that,” said Edreena Browne of Brooklyn Park.

“If you say you are a leader then you are a racist, then you’re not a leader,” said one resident named Dotun.

“I would not want that kind of a person’s name to be glorified on anything,” said Sue Worthman of New Hope.

The Brooklyn Center City Council discussed possible name changes at Monday night’s meeting. The majority of council members said on record they would be open to removing the Earle Brown name from city locations and landmarks.

City changes could be next. Brooklyn Center Mayor Mike Elliott plans to set up a time to meet with the book’s author and talk to the council about Earle Brown’s alleged connections to the KKK.

“The council is very concerned about the assertions that have been made,” Boganey said. “They’re going to look at it very seriously and do what they believe is best for the community.”