Protests and civil unrest in Brooklyn Center have calmed down for the time being. However, they are having a lingering effect on local businesses. Van’s Automotive Service is down the street from the Brooklyn Center police station. It’s also blocks away from where the protest and riots occurred after the fatal police shooting of 20-year-old Daunte Wright.

Hoang has three children of mixed race and says he can relate to what happened to Wright.

“We’re in support of the community. What happened wasn’t right for anybody,” said Hoang. 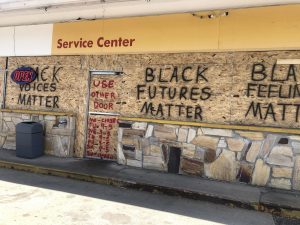 Hoang says business has slowed down since the shooting. Mechanics are still working on vehicles, but the company is not keeping many cars in the lot overnight after a few were vandalized.

Despite the negative impact on his business, Hoang is using the situation to uplift the community. He had his wife spray paint words of support and encouragement. “Black Lives Matter,” “Black Voices Matter” and “Black Feelings Matter” are etched on the side of the building.

“I think it sends a positive message to the community that better things are going to be coming for us in the future,” said customer Clif Watson.

“This is not a Black-owned business, but they still care about Blacks,” said Sanethea Barnes.

Hoang, who is Vietnamese, says he knows what it’s like to be discriminated against, especially with a rise in anti-Asian hate crimes.

“We’re always on guard when we’re going out in public somewhere,” he said.

Hoang says he doesn’t want his three children to live in a world where the color of a person’s skin matters.

“We’re all part of a future, everyone of us,” said Hoang. “We just need to get past the color.”