Brooklyn Center Barbershop Reacts to Chauvin Verdict: ‘It’s Going to Take Awhile for It to Change’

For the first time in Minnesota history, a white police officer has been convicted of murdering a Black man. After about ten hours of deliberation, a 12-member jury convicted former Minneapolis police officer Derek Chauvin of all three charges against him in the death of George Floyd.

Brooklyn Center residents and business owners were already on a rollercoaster of emotions since the April 11 fatal shooting of Daunte Wright, which also involved police.

Haircut City barbershop, located in Shingle Creek Crossing where rioting and looting took place after the Wright incident, took in the verdict. Like many of his customers, owner Armstead Lewis was on edge, waiting for the verdict to come down.

“Man, the feeling is kind of uneasy. You don’t know what’s going to go on,” said Lewis.

Everyone glanced at the TV between the trims and fades, wondering if the former Minneapolis police officer would be held accountable for his actions. The Black men in the shop say what happened to George Floyd could happen to them, too.

“We’re regular people. I can’t drive my car, you get pulled over with a thing in the window,” explained Lewis.

After much anxiety, the verdict was read. There was relief and cheers in the barbershop.

“The officer committed a crime he shouldn’t have committed, and we got justice in that order. That’s perfect,” said one of the barbers. 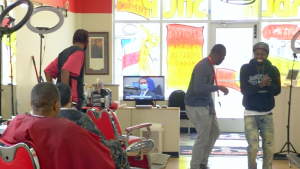 Relief, But ‘More Needs To Be Done’

People in the shop say they can breathe a sigh of relief, even if it’s just for one day.

“You can’t go out and kill somebody, and something is not going to happen to you. You don’t have a get-out-of-jail-free card anymore,” said Lewis.

“It’s systematic, and it’s been in the system so long. I believe it’s going to take a while for it to change,” said customer Dion Ware.

Almost everyone in the barbershop agreed that more needs to be done to ensure Black and brown people are not killed at the hands of police officers.