On the Golden Valley campus of Courage Kenny Rehabilitation Institute, you may occasionally run into volunteer Lance Philipp.

Philipp has cerebral palsy and needs to use a wheelchair to get from point A to point B.

“I’ve just learned to adapt to [cerebral palsy] because I’ve had it since birth,” Philipp said.

Yet there are still things in everyday life that can be tricky for Philipp and other people in wheelchairs.

In many buildings, Philipp says they’re placed about five feet off the ground. 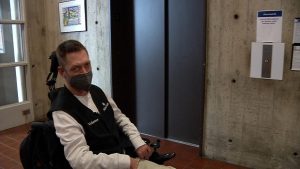 “And sometimes for those of us that sit down, that could potentially be almost too high to where we can’t even reach it to call the elevator,” he said.

It’s a problem many able-bodied people take for granted.

But about five miles away in St. Louis Park, a group of engineering students from Benilde-St. Margaret’s High School have begun working on a solution.

“Hearing about it, it really made us want to make a difference in their lives and help them out more,” said Annie Golinvaux, a BSM senior.

Golinvaux and a team of about 14 other students are developing a robotic elevator button pusher, thanks to a $10,000 grant from MIT that’s awarded to students working to invent technological solutions to real-world problems. 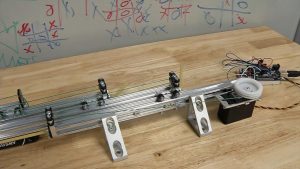 A prototype of the robotic arm developed by students at Benilde-St. Margaret’s.

The goal is that when this robotic arm is fully developed, it will connect to a motorized wheelchair and help people push those hard to reach buttons.

“There is other options that these people have, but those will cost, like, thousands of dollars,” Golinvaux said. “And we want to make sure we can make something that’s a lot cheaper, and that will really affect somebody’s life.”

The students are still working on the design, and they still have to test the device on the target audience.

“It shows us how hard it is to do these things and it takes a lot of work to get these things done,” Golinvaux said.

But when it’s all said and done, that hard work could have long-lasting impacts for people such as Philipp.

“Their ability to come up with this idea could benefit not just one person, but many people,” Philipp said.

The Benilde-St. Margaret’s students hope to have a prototype arm ready to showcase to the public in June.