There have been several recent sightings of a young black bear in the Maple Grove-Champlin area. A “teenage” bear is a better way to describe the animal, says John Moriarty, wildlife expert with the Three Rivers Park District.

Moriarty says the sightings occurred over the last couple of weeks. People have reported seeing the bear in the Elm Creek Park Reserve as well as at bird feeders in their yards, he said. 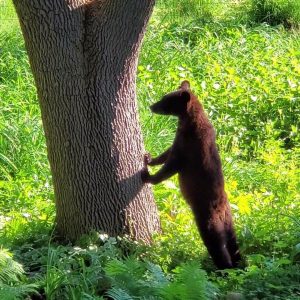 “It looked like probably a 2-year-old bear that has been kicked out of by the mom so she can have her next set of cubs,” said Moriarty referring the photos people have snapped of the bear. “They tend to wander around more and look for their own territories.”

Cubs grow very quickly and weigh about 80 pounds by the time they are 1 year old. By the time they turn 2, wildlife experts say they leave the family unit in search of their own area to live.

Bear Sightings “Not All That Unusual”

In Connecticut, where Moriarty grew up, bears are fairly common. It’s becoming more that way too in Minnesota as the bear population grows.

“It’s not all that unusual,” said Moriarty. “Every couple of years we get bear reports from northern Hennepin County.”

Three Rivers Park District experts say the bear population has picked up over the last 10 to 15 years. Moriarty said a mama bear hibernated with her cubs over a winter about 12 years ago in the Elm Creek Park Reserve.

“We as humans need to be more acceptable to a bear if we don’t want to make a dangerous situation, but at same time, just because you see a bear doesn’t mean it’s out there to be bad,” he said.

For the Most Part “Not Dangerous to Humans”

Moriarty says bears don’t want to interact with people unless they’re cornered and feel threatened. He says if a bear stops and looks at you, people should make themselves feel bigger. 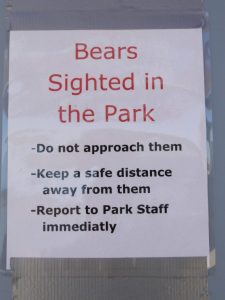 “Raise your hands out, stand tall, yell at the bear, let them know you’re there.” Moriarty said. “Ninety-nine percent of the time they’ll turn around and go the other direction.”

And he says there’s one thing you shouldn’t do if a bear spots you.

As young bears wander into the suburbs, Moriarty says it’s a important to recognize that bears are likely here to stay.

“Bears for the most part are not dangerous to humans,” Moriarty said, but “they can be a nuisance if they get into your trash or bird feeders.”