This week is restaurant week in Brooklyn Park, an opportunity to celebrate not only the city’s rich diversity, but also its diversity in dining.

There are more than 100 restaurants in the city, many of them family owned. All of them are counting on customers to survive these tough times due to COVID-19.

“We’ve all been at home a lot. And we’re all doing a lot cooking, I think everyone’s sick of doing dishes. It’s a great excuse to try some different restaurants,” said Natalie Conrad with Minneapolis Northwest Tourism, which also promoting restaurants through its World Flavors campaign.

Conrad says you don’t have to travel far to experience foods and flavors from around the world.

“A lot of people are not aware how diverse Brooklyn Park is and how great that makes the community and how rich in culture that makes all the businesses,” said Conrad.

Brooklyn Park’s diversity is matched by the diversity in its restaurants.

“It’s all authentic, I think is the big piece too because so many of these restaurants are locally owned. And they’re bringing the flavors from their home countries,” said Conrad. 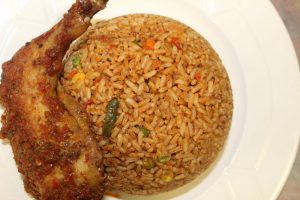 “That is one of my favorites,” said Conrad. “They make some of the best jollof rice that you’ll ever have. And it’s a signature blend of spices, so it’s very flavorful. They use all different kinds of vegetables. And you can decide what can of meat you want to go with it.”

Brooklyn Park also has its share of cuisine inspired by the variety of Southeast Asia. 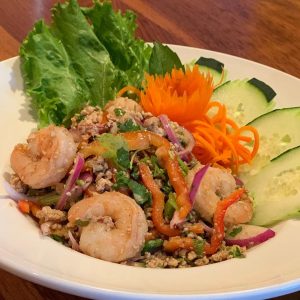 “Lemon Grass Thai I would say is definitely a favorite among many people. The chef is award winning,” said Conrad.

“Mi-Sant Banh Mi is another amazing option as well. It’s so cool to see how they’re combining Vietnamese flavors and then French delicacies. They have some of the best spring rolls I think you’ll ever have,” she said.

“And Rolls & Bowls is another really great one as well,” said Conrad. I think it’s kind of the definition of a hidden gem. It’s kind of a small spot in a strip mall and you would never expect. As soon as you walk in, the colorful murals and artwork, decor, you really feel like you’ve transported to a different country.”

Taste of Americana Too

Whether it’s traditional options or the spiced up variety, you can find a taste of Americana too. That includes food inspired by a trip down to a Louisiana bayou with a restaurant popular among Minnesota Vikings players called Crazy Cajun. 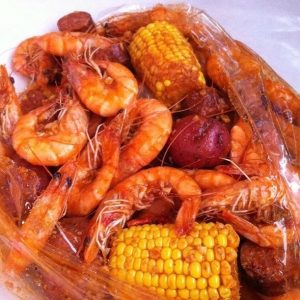 “They have really great options there, they have kind of a create your own fish boil. So you can kind of pick and choose if you want crab or fish or what you’re feeling that day. You feel like you’re out on the bayou just having a family barbecue,” said Conrad.

And if you’re having Minnesota State Fair withdrawal symptoms, there’s a remedy for that too. A visit to The Brooklyn over at Edinburgh USA Golf Course will help.

“Right now they’re doing some State Fair favorites. So they kind of have their version of the mini-doughuts, cinammon sugar mini doughnuts, which are amazing. And they’ve also been doing cheese curds,” Conrad said.

You can participate in Brooklyn Park’s Restaurant Week in two ways. First you can visit one of the participating restaurants and take advantage of discounts.

Or you can enter to win a prize by ordering from a participating restaurant (in-person, take-out or delivery), taking a picture, posting it on social media and tagging Brooklyn Park (@BrooklynPark). Restaurant Week participants will be entered into a drawing to win a gift card to a local restaurant.