Artists Announced for Maple Grove’s Concert on the Lawn

The Maple Grove Lions Foundation and the city of Maple Grove partnered together for Concert on the Lawn, two nights of concerts in September.

Each night will feature three musical acts and include beer gardens and food trucks at Central Park in Maple Grove.

On Friday, September 17, the theme is country and the following night, the acts will shift to rock.   You can buy tickets on the Maple Grove Lions website starting June 4 or go to maplegrovelions.org/concert-on-the-lawn.

ARTISTS AT CONCERT ON THE LAWN

Rockie, a veteran of the United States Army and Co-Founder of Tribute to the Troops national charitable organization has earned an enthusiastic following for his crowd-pleasing live show and his chops as a lead guitarist.  His debut single, “Lipstick” spent an impressive 10 consecutive weeks in the #1 slot on Billboard’s Country Singles Sales chart. His electrifying concert performances have garnered him a fiercely loyal fan base.

Hitchville has quickly solidified themselves among the upper echelon of regional talent.  Under the foundation leadership of dynamic lead vocalists Heidi Owens and Matthew Kneefe, the group’s trademark harmonies, down home personalities, and kinetic stage energy leads to an unforgettable live show.  The groups most recent album “Soundtrack to Life” includes their first iHeartRadio #1 single “Even When It’s Bad It’s Good” as well as their 2nd iHeartRadio #1 single “Love is the Road”.

Anderson Daniels is on a straight-line to creating the Midwestern sound in Country Music. Born in America’s Heartland, the 25-year-old Minnesota native takes pride in the blended sound that pulls from his roots. After taking home the New Artist of the Year Award at the annual Midwest Country Music Association Award Show in 2019, followed by a nomination for Male Vocalist of the Year in 2020, Anderson has toured extensively throughout the nation opening for some of country music’s legends and rising stars

Soul Asylum, initially formed in the early ’80s under the name Loud Fast Rules, quickly became part of the celebrated Minneapolis local music scene. This success led to the band entering the major-label mainstream with 1988’s Hang Time and its 1990 follow-up, And the Horse They Rode In On, before achieving a commercial breakthrough with 1992’s triple platinum Grave Dancers Union.

That album spawned several international hits, including “Runaway Train,” which won a Grammy Award for Best Rock Song, and “Black Gold,” and led to steady alternative radio and MTV airplay. Soul Asylum continued to enjoy mainstream success with 1995’s platinum-certified Let Your Dim Light Shine, which featured the hit “Misery,” and 1998’s Candy from a Stranger; the group also appeared on the soundtrack for multiple Kevin Smith movies, including Clerks. Since returning to action with 2006’s The Silver Lining, Soul Asylum has recorded steadily, and become a reliable presence on the road.

Vocalist/guitarist Dave Pirner will be the first one to admit that recording a Soul Asylum album can sometimes be very stressful, simply because he cares so deeply about every aspect of his songs and how the record unfolds. However, the frontman reports that making the band’s twelfth studio full-length, Hurry Up and Wait, was a completely seamless, enjoyable and productive experience.

In March of 2020, the band ended their best-selling tour in 15 years, The Dead Letter Tour.

Paul Peterson, born in Minneapolis, Minnesota, was the youngest son in a musical family. He was discovered by Prince in 1983 and groomed to replace Monte Moir as keyboardist of R&B band The Time. Peterson gained exposure when the band appeared in the hit movie Purple Rain.

When The Time broke up in 1984, Prince gathered the remnants to form The Family, with Peterson as lead singer. Peterson is also a session musician and has backed up many acts in concert. In the late 1980s to early 1990s, Peterson toured as a member of the Steve Miller Band. He has also toured with Kenny Loggins, Boz Scaggs, Donny Osmond, David Sanborn, Oleta Adams and most recently Peter Frampton. In 1990, he released a song, “Every Heart Needs a Home”, on the Teenage Mutant Ninja Turtles Soundtrack. From 1998 to 2000, he was the bassist in the house band on the Donny & Marie TV program.  His writing, producing and performing credits have contributed to the sale of over 20 million albums and is currently the host of the popular “Music On The Run” podcast. The Minneapolis Funk Allstars consist of former members that toured with Prince, Janet Jackson, The Time, New Power Generation, The Family, New Edition, The Steve Miller Band, Peter Frampton, and Kenny Loggins.

Adam Levy, Savannah Smith and Barb Brynstad are all mainstays of the Minnesota music scene and together craft an infectious, pop-infused Americana.  Adam Levy (guitar, vocals) is widely known as the leader and founding member of the Minnesota­based alt-rock band The Honeydogs. Singer-songwriter Savannah Smith (guitar, vocals) has been charming audiences in Eau Claire and Minneapolis for the better part of a decade with her dreamy, introspective material.   Barb Brynstad (bass, vocals), a veteran of the Twin Cities music scene is a singer, bassist and guitarist who has collaborated on theater and dance projects and played with some of the top blues, folk, and pop acts, including Willie Murphy, Chastity Brown and Tina Schlieske. 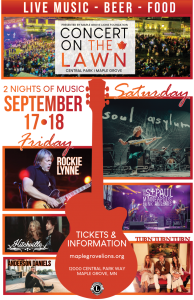